The first Taunton Youth Culture and Arts Festival (Tyca) has begun, thanks to Arts Taunton and some generous funding by sponsors. Young people’s art, sculpture and photography – with prizes – is now on display at CICCIC until 11 November. I hope to get to the PV tonight. If the visual arts are to play a greater part both in the lives of our schools/colleges and of the Deane, initiatives like this need our presence and encouragement. We can  promote and cherish younger artists, and invite them to work with SAGT – even join us. Our thanks to Laura Crofts for representing us.

Also coming soon, at the Museum of Somerset, is the Tristram Hillier exhibition, which starts on November 9 and runs into January, and promises to be well worth seeing and even going back to for further helpings. I remember being excited by his landscapes of the South Downs but know little else.

I commend two further happenings: my talk on  Mondrian and Ben Nicholson on Saturday 23 November, 11.00 am at Trull Church Community Centre, the last of this year’s talks; and our Christmas Lunch for members and their friends at the Quantock restaurant, Taunton & Bridgwater College on Wednesday 18 December at 12.30. Anna Mullett will send out menus shortly and invite you to book your place.

In my November talk I will focus on an exhibition at the Courtauld Gallery in 2012 which showed  paintings, by Mondrian and Nicholson from the 1930s up to 1943. Their friendship began in Paris when Nicholson visited Mondrian’s studio and ripened over those years. Winifred Nicholson, whom I talked about last year, insisted that Mondrian leave Paris before the Germans arrived, and she brought him safely to England and Hampstead where he stayed for two years with a studio close to the Nicholsons before leaving for America when the bombing of London started. But the two men’s art, related but different, is the heart of the talk.

This year’s tenth Ken Grieb lecture was a success with much laughter and learning. Thank you to those attending and for the many apologies received. We began by remembering Ken and his gift of these talks, Our speaker was Dr. Jan Cox from Clevedon, who specialises in Nordic Art. He talked about Thomas Fearnley (1802-1842) and the Golden Age of Danish Art, someone new to his us. Norwegian by birth, he had an English grandfather and studied in Oslo, Copenhagen and Stockholm, choosing to be Danish, it seems, and a constant traveller. On the mainland of Europe he studied in Dresden with J.C.Dahl, learning especially to observe nature, and then in Munich where his style was influenced by the local school of landscape painters and by his earlier meeting with Caspar David Friedrich and his way of composing grandiose atmospheric effects.

A bachelor, sketching and painting outdoors by day, Fearnley, naturally merry and gregarious, met other artists in the evenings in the local tavern for food, drink, and song. Cox illustrated this camaraderie and his journeys and their output with extracts from letters and recorded impressions, and showed how his sketches made attractive landscapes, usually with people in them. In Italy (1832-35) his charming pictures of the landscape around the Bay of Naples especially delighted, as did his Lake District paintings of August-September 1837. This tour followed his visit to the Royal Academy where he sketched Turner, perched on a stool, on varnishing day! Fearnley for some years hoped to marry an heiress from Halse – this was the local interest  moment – but later did marry another heiress only to succumb to typhus and die at the peak of his considerable powers in his late thirties.

Two further things of note happened that Saturday in Trull: our speaker was excited by the bright colours of the screen in the East room (unknown to us the equipment had been updated) and by our being so close to him, and he and we enjoyed the resulting interplay. Secondly, we received an informal visit from our MP Rebecca Pow and her sister in the interval, gave them a drink and they chatted and learnt about SAGT, then posed for a photo before leaving to see the marvellous Botanic Art in Taunton Library.

Talking about books I’d like to recommend In Camera Snowdon edited by Robin Muir, a Pallant House Gallery catalogue, 2007. Kevin Saunders has lent it to me. It consists of photos of artists, often in their studios, and a commentary or story or brief biographical cameo. Delightful.

Your turn now. Please feel free to recommend to Anna or me a favourite art book with an accompanying few words, which we could then include in future newsletters. 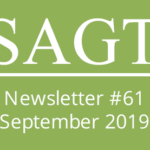